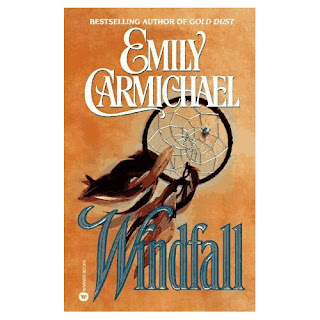 I really enjoyed this older romance. It's a Victorian (takes place in 1899-1900) and also a western, at least for the last part of the book. It's got an across the pond romance (my phrase for a romance between an English person and an American). The heroine is half Blackfoot Native American and half Irish, and she is a doctor. The hero is a British baron. There are some issues that have to be dealt with because of what happened to the heroine when she was in Paris getting some post-doctoral training. I won't spoil you on that, since it takes a while for this to be revealed as the story continues.

I really enjoyed the way the relationship developed between Ellen and Jordan, and the evolution of the characters. Jordan seems really stuffy and priggish initially, but you realize that it is training that he has undergone as the heir to a Barony and the head of the family. I enjoyed seeing a heroine who is a professional and a career woman.

It's got some funny moments and some angsty moments. It's also got good love scenes, perhaps a little tame by today's standards but I liked them.

I recommend this one if you can get a hold of it. Unfortunately it's part of a series. The first book is Outcast, about Ellen's dad Gabriel and her stepmother, Olivia, who is a doctor as well. The second book is about Ellen's identical twin, Katy and her newspaperman hero Jonah.
Posted by Danielle at 5:45 AM