Naughty or Nice by Melanie George 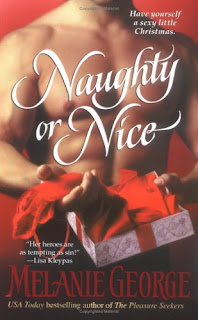 This book kept me up late this Saturday as I found I could not put it down without finishing it. How I feel about the book is complicated. It was a very good romance with elements of realism that added to its appeal. The hero was not a goody-two shoes titled hero with no dark past or issues other than chasing women, drinking, and gambling. He does indulge in those sports to various degrees, though. Instead he is self-made and comes from the lowest of the lower class. He had grown up extremely poor in the worst of conditions. His father was a terrible man who abused him, his siblings, and his mother. He gets into trouble with an Earl's wife and ends up being shanghaied off to India where he develops an addiction to opium. He never hears from his family again as they simply disappear. Despite all this, he manages to become a respected and admired military man. Lucian was a complex character who I did not always like. I have a strong aversion to substance abuse so I know that this was a major issue for me. However, I really do like flawed heroes, so that was also an advantage. I struggled with whether I felt his reasons for falling into opium addiction were valid. In the end, there is definitely some credence for him seeking solace in the drug, although it wasn't a wise decision for his life. He was a honorable man in many ways, but at the same time, he did not always do the right thing. I liked that he was irresistibly drawn to the heroine, Fancy, who he finds out later is his ward. Initially he thinks she is a thief and a working-class woman who is available to be his short-term mistress. The initial draw is lust, but soon he finds that she brings him peace. When he finds out late that she has been pretending to be someone other than his guardian, it makes things a lot harder for him, because he knows he must give her up. The reasons why Lucian is Fancy's guardian stems from his time in India serving as the commanding officer for her brother. Even that situation turns out to be very complicated. This book is a very complex one to read, but very readable at the same time. It deals with issues of addiction, poverty, guilt, forbidden love, and also delves into the wrongs of imperialism. Although you could pick it up to have a nice romance novel read, be prepared to have your intellect and your heart involved, as this book does delve deep as the hero finds his way out of the morass of drug addiction and a tortured past into a bright future with Fancy.
Posted by Danielle at 7:06 AM

Labels: Christmas Read, The Power of A Book