Fire and Ice by Sherrilyn Kenyon 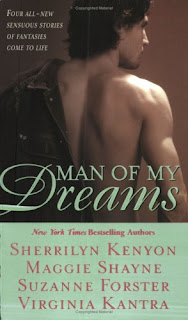 I adored this story. It has all the elements that make Sherrilyn Kenyon irresistible as a writer for me: imaginative story and setting, well-drawn, likeable characters, flawed hero who is deeply tortured both physically and spiritually, a deep, emotional connection between the hero and heroine, and the promise of redemption and a bright future. It took me about an hour plus to read this story, but the joy of reading it will last longer. You have what looks like a hopeless situation initially that becomes a catalyst for a wonderful love between Adron and Livia. Livia is being forced to marry a really old man by her father. In order to be suitable as his bride, she must be a virgin. In her culture, women are kept extremely innocent. Thus, she has not even been alone with a man who is not her relative, much less had physical contact. Together her and her maid come up with the idea to find a man and sleep with him so she is no longer a virgin. She goes to a bar and finds Adron, the most beautiful man she has ever seen. However he is deeply scarred both physically and emotionally. She seduces him with a kiss, and he decides to take her home. From there, their lives become intertwined in the most beautiful of ways. This story accurately portrays the challenge and the agony of being disabled (the hero was badly wounded and tortured as a League Assassin. Each day is excruciating pain and limitations due to the fact that his internal organs sustained massive injury). He wanted to die but his brother would not kill him. But at the same time, he won't kill himself because he knows how much his parents and family love him. My heart just went out to him for his situation. Knowing people who deal with disabilities every day, I could see that this was real life, although in a fictional story. That is why I loved the ending of this story so much. I read Fire and Ice in the Man of My Dreams anthology, and even though I don't plan to read the other stories, it was definitely a worthwhile purchase and a keeper for me.