Revenge of the Witch by Joseph Delaney 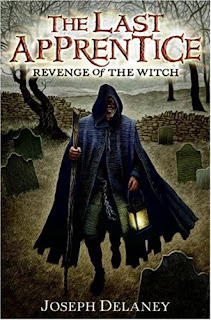 I'd really rather give this one 4.5 stars, because it was an excellent book. Although a young adult book, it is definitely sophisticated enough for an adult to enjoy it (I don't consider myself sophisticated, but I still think a person who is would like it). I liked that the suspense builds. There are no cheap thrills or shock value scares. Instead, the author takes his time and builds up the menace so that you spend your time trying to prepare yourself for the scare. Even still, you won't hear someone yelling 'boo.' Instead the moment of dread will come and you will think, whoa, "I'm glad I'm not in Tom's shoes right now." I do love stories where a character comes into their destiny, and this is one of them. Tom wasn't really sure that he wanted to be a spook after all. But he didn't have any other trade in mind, and he definitely didn't like farming. But it turned out his destiny was waiting for him as the seventh son of the seventh son. He was apprenticed to train as the next Spook, which is a person who rids the towns of evil, supernatural creatures. It is a job that is looked down on by others, and promises to bring the bearer a lonely life. But at the time, Tom figures it's better than farming, and his mother doesn't really give him much of a choice. Let's just say she had his destiny determined long before he was born. You get to see Tom struggle with his role as the Spook's Apprentice, several times, deciding to quit but having his mind changed in various ways. He makes some mistakes along the way, but learns from them, so there is also a good coming of age story in this book.

I like that there is definitely good and evil in this book. But there are also humans who could go either way. Yes there are bad witches, but there are some that are benign. There is one character that is likely to be in-between, and she has a very pivotal role. I believe that she will have a very important place in Tom's life as he matures. Perhaps there will be a romantic future for Tom and Alice when they get older.

The parts with the witches really did unnerve me. They are horrible creatures who kill and eat people and use their bones for dark magic. It was refreshing to read a book that actually had bad witches for once. I was very proud of young Tom for facing off on not one, but two witches that were out for his blood and his bones, and saving a young child that was likely to be one of their victims.

The author really did a great job of setting a sinister tone. It wasn't over the top, but very subtle and building. His use of words drew a very vivid image, where I felt as though I was standing there and the witch was crawling out of the grave to get me.

Another thing I liked was that this story was not predictable. You don't know how it's going to end. You don't know the way in which the witch will manifest herself. She could have possessed any one of the people in the house during the climax moments of this story.

Tom was a sympathetic, likable narrator. He was realistic for his age, but I truly did admire his bravery although he was scared when a rational person would have been scared. He was often left to deal with situations that would have been challenging for a grown-up, much less a boy of twelve. He risked his life to do the right thing, and that was very admirable to me.

There are questions that I would still like answers to, but reading the next books in the series, will definitely give insight into the enigmatic Spook, and Tom's mother, who has gifts that are still somewhat mysterious at this point.

If you want to read a young adult book that has the appeal of giving a good, sustained scare instead of a series of shock value, short-lived scares, I think you would enjoy this one. A cool bonus with this book is pages of Tom's journal, a map of the areas in the book, and the key to the codes used by a Spook in his trade....
Posted by Danielle at 5:49 AM