Jewel of Atlantis by Gena Showalter 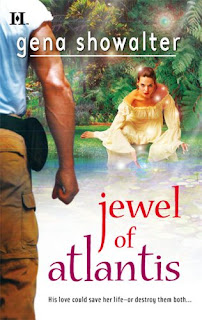 I'd give this 4.5 stars if I could. Although it took me a while to finish this book because of outside factors, I thought it was pretty awesome. My one complaint is I think the ending was a bit rushed. This might be the hottest book that I have read by GS so far. The love scenes were pretty steamy. One thing I liked is that Gray has a very large POV in this story. It's really cool to see a romance from the guy's perspective. And I feel that his viewpoint read pretty authentic for a guy. He did and said, and thought exactly the way I would imagine a man would think. Now I have never walked in a man's shoes, so I might be disputed on this. Nevetheless it felt real to me.

As typical for GS, there was an aura of sweetness and good-naturedness to this story. It is difficult to describe, but in the books I've read by Ms. Showalter with the exception of Awaken Me Darkly there seems to be this upbeat tone. Now that doesn't mean that bad things don't happen and people don't die in this book or her others. But you get the impression that in the end, everything will work out and good will prevail. I must say I like that about her books. Life can seem pretty dark and hopeless. It's nice to read a book with an overall tone of optimism. I love my angsty, dark romances, but it's also nice to read some that are on the upbeat side as well.

The mythology in this story is pretty interesting. It borrows from Greek myths, but there are some extra things added. I have never thought of vampires as being a large aspect of the Greek mythology, and I believe the Formorians are from ancient Celtic mythology. Thus I feel that there is a potpourri of folklore used to develop Showalter's Atlantis universe. As always, I am a folklore/mythology geek, so I enjoyed seeing the mythological creatures that populated this story.

It was also nice to revisit Darius and his bride Grace, and see the intriguing Layel (can't wait to read his story). Those demons are just gross and don't sound the least bit attractive to me.

I really did like Jewel. She was a sweet person but also formidable in her own way. She had been in love with Gray from afar for many years, seeing him in visions in her mind. I thought it was sad that she had seen the profusion of women he'd been with in her mind in excruciating detail, but she didn't let that bother her, but took her opportunity to be with him the capacity available to her. I appreciated her love for others, and how she often tried to sacrifice her well-being to help others. She had a rough existence, but in a way that is rather different from other romance heroines.

I must say that this is a great book to read if you are a fan of the paranormal genre. It's not dark and intense in the way that a lot of the popular series right now are. But it's very good and fun, but has depth that will fill your hours until the last word has been read.
Posted by Danielle at 3:56 AM