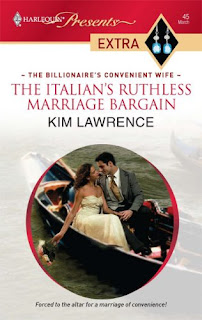 Man the blurb is a bit misleading. They make Jude seem like a wallflower. She really isn't. She's got a PhD (ladies who are looking for HP heroines with a higher education and a good career read this one), she's got a nice place to live, and I would consider her successful. She sounds pretty attractive to me. Not drop dead gorgeous, but an attractive woman. She just feels like she's not attractive at times because of her mother's overbearing ways. So Ivwouldn't exactly call her a Plain Jane although I would add this under that theme in my bookshelf because thats how Jude sees herself. It was a good book, a quick read. I've read better by Lawrence, but it was enjoyable. It had some angst, but not too much. One thing I didn't like was you really didn't get to know Luca's daughter Valentina that well. You got more glimpses of Jude's nieces and nephews than you get of Valentina. I think if you're going to plot a book around a child, they should make more than a token appearance. Otherwise, they are merely a plot point.

Luca started off being a bossy alpha who was on the judgemental side. But he he didn't stay that way long enough to be annoying as does happen frequently in the world of Harlequin Presents. Another staple of the HP land is the enormously tall, so hot he can melt off your panties Italian hero. This book is no difference. Jude can't seem to keep her hands off his body and blurting out things about how gorgeous he is. She even propositions him. Of course, he accepts, but his plan is marriage all along (that's refreshing, isn't it?) She just wants an affair. The reasons weren't clear except I think she felt he couldn't possibly want a girl like her. Yes, I think that's what it was (I was really tired when I was trying to finish this book, so forgive me). Anyway, I personally would be rather embarrassed to proposition my neighbor like that. But heroines can get away with things that us real life girls don't dream of doing.

There was some good steam and I wanted Jude and Luca to be together. The ending was nice, but nothing to write home about. I think I would have enjoyed this book more if I wasn't half-dead from exhaustion from working a six day week last week, and twelve hour days and getting up at 4 am every stinking morning six days in a row with one day off. If you like Kim Lawrence, read it. If you want a couple hours of light entertainment, I think you'd also enjoy it. If you are a fan of HP books, it would be a worthwhile read. But I don't think it would knock your socks off. If I could, I'd give it 3.5 stars instead of 3 stars.
Posted by Danielle at 2:22 PM