Kiss of Midnight by Lara Adrian 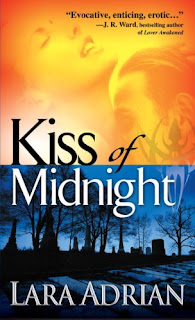 Good book and very imaginative storyline. Adrian really developed a unique concept of vampirism and vampire society. Although the warriors remind me of the Black Dagger Brotherhood, they are not carbon copies, and the Midnight Breed series is claiming its own place in the paranormal romance genre. I love warriors, and these guys are definitely creme de la creme. One thing that bothered me was the casual indifference about humans being killed by the Rogues. The Breed warriors did protect humans, and that was clear, but the ones that died in this book didn't seem overly mourned by the warriors. It seemed a little callous to me. Perhaps this due to many, many years of seeing humans dying and savagely killed by the Rogues. Lucan is a hard man (vampire), who doesn't open his heart. It was great to see Gabrielle sneak into his heart. For a young woman who felt isolated and drifting in her life, I was happy that she found her home in Lucan. I am curious about the warriors that fight alongside Lucan, and I can't wait to read their stories.
Posted by Danielle at 3:20 PM

Labels: What I Read Recently

Great review of the story. I have yet to read this book but it is somewhere in my dreaded TBR pile. I'll have to dig it out soon.

Thanks Barbara and Bella for checking out my blog. I know what you mean about the intimidating TBR pile.

This book has been in my tbr for forever.. great review :)