To Have and To Hold by Patricia Gaffney 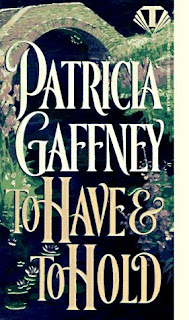 This book is one that sneaks up on your senses. You start reading the first sentence and before you know it, you're hooked. It was that simple. The writing flows, and the beauty of it is captivating. Yet at the same time, it is not flowery or florid. Just exhibiting the careful and artistic use of words to tell a story of redemption and growth. Sebastian Verlaine is not a pretender in the world of rakes. He is a true rake. He has lived an aimless existence of a sybarite, doing only what felt good to him, and only as long as it pleased him. He is on the crux of either descending to a lower level of debauchery, or turning his life around. When he encounters Rachel Wade, a woman just recently released from prison after 10 years, and arrested for vagrancy because she is homeless, this becomes a crucial moment in his evolution.
The manner in which the story enfolds is interesting. Sebastian has recently inherited Lynton, which is property from his disceased relative. He decides to go and stay there for a lark, and for fun and out of drunkeness, agrees to act as a local magistrate. As such, he is in a position of power to offer Rachel Wade a job as his housekeeper. In reality, it is also the position of his mistress. Sebastian finds himself fascinated by this beaten down woman, who was sentenced for murdering her husband, who had committed depraved acts on her. He is attracted to the luridness of the situation, and also by the woman herself.
When reading this, you are thinking, how could a person do a good deed for such a questionable reason. You see Sebastian laying his trap and allowing Rachel to settle into her position and you worry for Rachel. Yet Rachel is no fool. She knew all along to expect something along those lines, but her choice is to be put in the gaol for vagrancy, and to starve, or to accept relative comfort of a job, a place to stay, even if the price tag is to accept the unwanted attentions of her employer.
So begins this unlikely romance. At first, this is more of a character study as you watch Rachel adapt to no longer being a prisoner for ten years. You see her gain her self-confidence and overcome her sense of shame for being a convict, when she had been falsely accused in the first place. At the same time, you see Sebastian plotting and continuing along on his nefarious course, yet at the same time, slowly changing and developing a sense of purpose when before he only had a sense of boredom and jadedness. This evolution is so well done, that by the time you realize why Sebastian is such a rake, you have already forgiven him for it and accepted that this was his past. This was profound to me, because I have read more than a few books with rakes who really never seemed all that repentant, and certainly weren't fully changed by the love of the heroine. Characters that you wondered if they wouldn't end up falling off the wagon years later on, after the book was over.
The first sexual encounters are not consensual. Yet this is also done tastefully. Again, you are not reading this book as a romance novel at this point, but as a fiction work, and so it doesn't jolt you or offend your senses. Instead you keep reading, to see how this will unfold.
There are moments when I felt, that Sebastian commit the final act that would serve as the straw would breaking the camel's back, and I would come to hate him. Gaffney leaves the reader poised on the cliff of expectation, so skillfully keeping the reader's interest, as Sebastian has to make a choice, whether he truly is an unforgivable, irredeemable rake, or if he is a human being who does have ethical boundaries he won't cross. This moment arrives when he invites some of his jaded companions to his house, and allows them to bait Rachel verbally but does nothing. The situation worsens as one of the attendees states his intent to force his attentions on Rachel. At first, he acts like he could care less, because that is how the old Sebastian would have reacted. At the last minute he intervenes, and the breath that I was holding is let out.
From this point on, the story shifts as Sebastian learns how to love for the first time in his life. He becomes a caring person, learning to put someone else's needs first. And it really is touching the degree to which he devotes himself to making Rachel happy. I love redemption stories, so I really enjoyed reading about his transition to an honorable man. Or maybe, that seed was always deep inside of him, but he didn't allow it to germinate. When you get a glimpse into his family life towards the end of the book, you really how no questions why Sebastian acted the way he did at the beginning of the book.
This book works wonderfully on many levels, as a fiction book, and as a romance. It's not at all predictable, which is refreshing. Of course, you know that a happy ending is going to be given, but you don't exactly know how it will arrive at that point until you get there, and you almost want to read it again just in confirmation.
To Have and to Hold is a good example of the fact that romantic fiction should be respected for its power. Romance novels are wrongly labeled as fluff, trash, and worthless. But how could a book with such a deep message, and with such powerful storytelling ever be considered fluff? I will proudly put this piece of romantic fiction on my keeper shelf.
Posted by Danielle at 7:57 AM