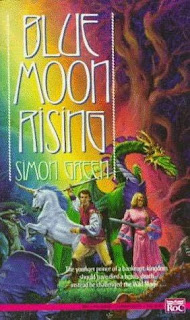 Blue Moon Rising is a thrilling, entrancing story that you will have trouble putting down. It's quite long, at just under 500 pages, and there is so much going on. Yet the storytelling is so involving that you don't have time to be bored. Although this is definitely a fantasy book, it also is a story about an everyday type of hero, even a reluctant hero. Rupert is a man who was raised to live in his brother's shadow. He is the unwanted second son of the Forest Land Kingdom. His father deliberately did not encourage a close relationship between him and his son because he thought he might have to one day order his death to prevent civil war in the kingdom, as there can only be one king. Also the rather cutthroat world of court politics did not encourage him to trust. As such, Rupert is a loner by nature, his one friend his trusty unicorn. The story begins when Rupert sets out on his quest to find and kill a dragon, as ordered by his King. Unfortunately he must travel through the Darkwood, which is a place of ancient evil and darkness. This journey starts Rupert down the road to becoming the strong, cpable man that he is meant to be. Watching Rupert evolve is fascinating. I found myself falling in love with Rupert early on in this story because of his will do what is necessary, but also his heart and ability to love and give of himself selflessly. When he meets Julia, neither of them knows how pivotal they will be to each other. Julia is a cast-off from her own kingdom, meant to be a sacrifice to the dragon, who doesn't want to eat her, and actually would prefer if she went away with the Prince. The dragon is a jovial personality, who becomes friends with Rupert, and accompanies Rupert on his journey back home. So begins a trek that will test the mettle of the four, in every way. For the Darkwood is expanding, and the night is spreading, and the bloodthirsty demons with it. This book has a lot of sad things happening, and a lot of people die, but there is also a lot of humor. To me, that is the best thing about Green's writing: he is very funny. But he also uses worlds richly but not floridly, to tell a great story. At times, this story can be bloody, but Green's humor and what I believe is his goodnatured approach to life that shines through in his stories keep the book from being depressing. I wouldn't want to spoil anyone, but it definitely has a happy ending, or I wouldn't love it so much. For those romantics, there is a great love story between Rupert and Julia. This couple is made for each other, and you are glad to see them find love with each other. There are magical creatures and magic throughout the book. If you like such things in a book, you would love this one. I don't know that I've read much high fantasy, but I would consider this in the vein of high fantasy, but with a sense of humor and lots of action that keeps it readable and moving along at a rapid pace.In the end, I cannot say enough how much I love this book. I definitely look forward to reading more about Rupert and Julia's adventures, which continue in the Hawk and Fisher books.
Posted by Danielle at 6:51 PM