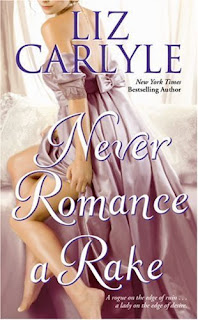 This book was an enjoyable read. I must admit that Kieran's determination to debauch himself into the grave was a bit annoying at times. He had some serious guilt over an infraction he committed against his brother many years ago, and was horribly abused by his uncle guardian. Fundamentally, he has a lot of self-hatred which drives his cycle of drinking, carousing, and not taking care of himself. One thing I liked is that although it appears that he is saving Camille, she is actually saving him. He never even rethought his lifestyle until she came into his life and gave him something to live for. He carries on the act (minus the carousing) into the marriage, but Camille's backbone and determination are the factors which help him to turn his life around. Carlyle is an exquisite writer. I do enjoy reading her books. Her love scenes are pretty hot but tasteful. I didn't like the first love scene because it felt tawdry, but then maybe that was the point. This is rather early on into their relationship, and Kieran hasn't faced that his feelings for Camille are deeper than sexual. The other love scenes have more of the emotions that were missing from the first one. It was nice to see Kemble in this one. He's a fixture in the Carlyle books. This is actually the third in the trio after Never Decieve a Duke and Never Lie to a Lady, so we meet the two prior couples after the fact. However this doesn't spoil the book. This works well as a standalone, although you will probably be tempted to go back and read the other books, as you will probably find the supporting characters interesting and engaging enough to read more of their stories. I would say that this book shines because of its heroine. She is strong and a survivor. She's very intelligent and pragmatic. She's not a whiny, insipid, stupid heroine that makes you want to throw the book down out of frustration. In fact, her balanced, mature personality is a saving grace for Kieran, and ultimately it is why I did like this book so much. She's had a rough life, but she is determined to succeed in having a better future. Her grit is irresistible. I also like that she is so very French, but not in a stereotypical way (at least not to me). I also liked that Carlyle uses the slavery culture of Barbados as a major plot point, as Kieran grew up there. It plays a role in shaping why Kieran has the issues he does, and becomes part of his mission for the future once he turns his life around. While this was not my favorite book by Carlyle, it was engaging and a keeper. I have an issue with prolonged self-pity (everyone is allowed five minutes and then you need to move on), so I think that is why this wasn't five stars.
Posted by Danielle at 9:30 AM