The Santangeli Marriage by Sara Craven 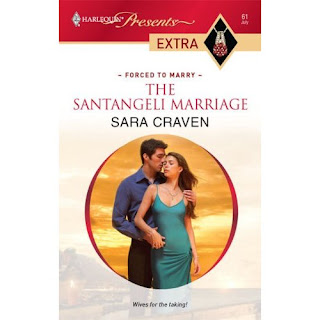 The Santangeli Marriage by Sara Craven

This was a fairly angsty book. The hero did something that angered me, but I was able to keep reading it. The heroine didn't always act very mature herself. But there are extenuating circumstances that made me want to keep reading and see them for flawed human beings.

It started when Marisa and Lorenzo's mothers were friends in boarding school. They promised that their children would marry each other. Years later, both Marisa and Lorenzo have this promise hanging over each other's heads. Not to mention that Marisa feels indebted to Lorenzo's family for taking care of her when she is orphaned. She doesn't find this out until her nasty cousin and guardian tells her after she has gone on a date with another man.

I could understand Marisa's resentment towards Lorenzo. Who wants to marry a guy who clearly doesn't want her but is doing so because of a promise made between their mothers? Lorenzo tries to woo her in a distant fashion, but he doesn't really show the warmth and reassurance a young, awkward girl would need. Things just get worse when they get married. Pretty soon, they are living apart.

That's when Lorenzo does the stupid thing that made me want to slap him. He sleeps with a married lady out of hurt pride because Marisa won't take his calls or answer his letters. I tried to be fair and put myself in his place, but I felt it was wrong to cheat on his wife. He should have just went to England to find her and work things out. Finally he does this when his father has a health scare and he gets a report that Marisa might be seeing her boss.

So he convinces Marisa to come back home as his wife. Things really don't get better from here. They are both stubborn and emotional, and don't know how to communicate. It was quite frustrating to read. Then we find out that Marisa might not be able to fulfill her obligations in the first place. That was really painful.

I felt this was a good book, and it really did get me involved. The ending is bittersweet but hopeful as they make a commitment to love each other for the rest of their lives.


View all my reviews.
Posted by Danielle at 6:23 AM

you give such indepth reviews! You make me almost want to start reading some romance novels. Almost. hehe. But great site!

Thanks. I love reading and posting my thoughts. Glad you enjoy them.