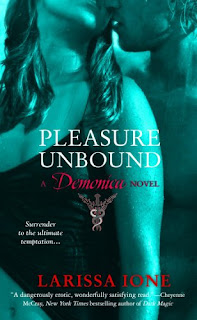 This book is utterly fascinating. What an interesting universe. I wish I had this author's imagination. For anyone who's read Lovecraft, I think this book is Lovecraft mythos meets romance novel. I can say that reading this book was a unique experience. Ms. Ione did a fantastic job developing this world within/around/under the regular world, where demons are the good guys. Sort of. Not all demons are good, but not all are bad. I can't say too much about that without spoiling a person who wants to read this book. Let's just say that it really turns around things for a person raised in the Christian tradition. I don't feel like a person who believes in Christianity shouldn't read this book, though.

This book is sexed up. However it makes sense if you consider the characters and their demonic type. I felt that the sex did fit in with the story very well.

The characters are well-developed and interesting. Their motivations are clear and their struggles play well into the storyline. I feel that Ione captures the tortured characters that I like very well. Although she follows a similar formula for the paranormal series, she claims this niche and makes it her own. Tayla is a likable heroine although she is not the unblemished, cleancut type of heroine. She's had a very rough life and seen and done things that would keep some people up at night. I admired her fortitude and her strength. She had to go through some pretty painful things in her life, and within the timeline of this story. Eidolon was also likeable and conflicted. He's born to be on the dark side, but has done his best to have morals and has dedicated his life to medicine. He is about to face a change in his body and mind that could drive him over the edge, and it does make this story compelling. It's hard to say too much because it would spoil a person, so I am eluding to these things. I would say that reading this book is like peeling away onion layers to find higher levels of understanding. It's an enjoyable process. As a fan of mythology and folklore, I think she made the demonic taxonomy, if you will, very credible for her universe. I wouldn't mind reading one of the demonic natural history books that Eidolon owned, in fact. She made up quite a few species and gave them characteristics that were interesting and creative, causing laughter at some moments, and dread at others.

One of the things I liked about this book was how she played with the reader's perception of right and wrong. You go from feeling bad for the humans, then to feeling bad for the demons, and then you come to realize that in this universe, neither group is always right or always wrong. They both commit atrocities that will make you wince, and it adds to the moral ambivalence of her universe. For that reason, you should approach this story with an open mind and with the understanding that it is a fictional world which does not have to have bearing on our consciousness of the real world.

The secondary characters are very intriguing, particularly Eidolon's brothers. You definitely want to read about their stories, and also Gem, who plays a very pivotal role in this story. I want to see how things play out with the human male Kynan, who she is in love with.

At times eye-raising, and always intriguing, I did enjoy this book. I felt that the ending was a bit rushed, but overall, the pacing was very good and the story flew by.
Posted by Danielle at 4:41 PM

Labels: What I Read Recently