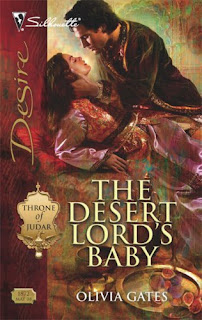 The Desert Lord's Baby is the first book in the Throne of Judar series, although it's the second book I read. This book is one that sucks you right in. The writing is so vivid and poignant. The characters are never lukewarm in their emotions. In fact the book seethes with violently intense emotions. Carmen and Farooq are a couple that never should have been parted from each other, but misunderstandings and fears crop up and come between them. I feel that if they had just made a commitment to each other early on instead of having what they called a three month affair, then their wouldn't have been that insecurity there, but what do I know. After the rejection she faced with her parents and her first husband, Carmen doesn't have much reason to believe that she could be loved for her self. Yes, paradoxically, she gives herself unselfishly and completely. This is clear from page one. Farooq is used to having his way and cannot believe that a woman would choose to leave him, not to mention a woman he was so deeply attracted to an in love with. He doesn't think to read between the lines when Carmen ends their affair with what has to be a pretty blatant lie if a person really thought about the person who uttered it. But something causes him to track her down, and he finds out she's had his child. He falls instantly in love with their baby, and the scenes of the little cutie make it easy to accept this. Mennah is described as a miracle baby and she is in more ways than one. She brings this couple back together and gives them both peace that they were needing desperately. Again I was captivated by the incredible emotional intensity of the storytelling, teamed with an exotic setting that I am a sucker for. Ms. Gates seems to have a definite appreciation for Arabic culture, and with her writing skills, the reader cannot help but be equally attracted to it. The love scenes are very steamy for a category romance but they belong in a story with such a fiery, intense relationship between two people. This one is a another recommended read for sheikh romance lovers.
Posted by Danielle at 6:18 PM