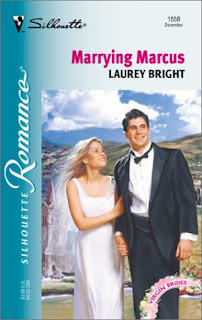 This was a really good, quick read. Jenna thought she was in love with her best friend growing up, and thought Dean would ask her to marry him when he came back from the United States. When he comes back with a fiancee, she is devastated. Marcus, his older brother steps in to console Jenna and to act as a buffer. What she doesn't know that he has been deeply in love with her for years. When he asks her to marry him, she thinks it just a marriage based on friendship, family love, and passion. I liked this book a lot because of the fact that Marcus had been so much in love with her, but had kept it to himself because he saw that Jenna only had eyes for his brother, but he takes his chance to have her when he gets a chance. I also liked that although Jenna had been infatuated with Dean, once she is married, she puts those feelings aside and focuses on her marriage and her growing feelings for Marcus. She doesn't have any confusion about that once they get married, and she is faithful to him in heart and body. Marcus has to deal with his jealousy issues because he doesn't realize that Jenna loves him with a woman's love and not with a girlish infatuation like she did for Dean. It's a sweet but passionate story of how love can sneak up on you and come in a form that you weren't expecting.
Posted by Danielle at 4:08 PM