Beauty and the Greek by Kim Lawrence 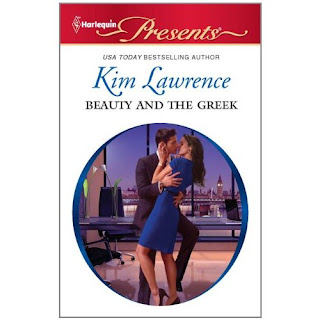 Beauty and the Greek by Kim Lawrence


Beauty and the Greek immediately went to the top of my HP to-read pile when I got it in the mail. I liked the idea of the admin assistant who is hopelessly in love with one brother, and who gets help from the other brother to snare her man, and falls in love with him in the process. I am not a big fan of the 'makeover/Pygmalion' theme, because I believe that people should be loved for who they are. However, I am not adverse to it being handled the way Ms. Lawrence did in this book. In the case of Beth, Theo didn't really pay attention to her because she was his brother's AA, she dressed very prim and proper-like, and she treated him with very noxious disdain. One day, after being talked to very nastily by her (which is usual, but it was just more than he was willing to put up with that day from an employee), he is about to give her a set-down, when he notices that she is crying. This happens to be the day when Theo's brother Andreas proposes to Theo's ex, Ariana, who is a piece of work who cheated on Theo when they were together. In other words, not a woman he'd want his brother to marry. When he realizes that Beth is 'in love' with Andreas, and he sees the potential she has, really quite pretty with beautiful hazel eyes, thick dark hair, and a sexy, slim but curvaceous body that she hides behind grandma suits, he decides that he's going to help her get Andreas' attention.

I liked that this plan allowed Beth and Theo to spend some time together. After being played by Ariana, Theo has closed his heart off to love. His relationships are all with career women with no interest in anything beyond satisfying sex and themselves. Beth stands out because she's honest and real (and appealingly sweet, although that's not his normal type). She's not afraid to tell him off, and he admires her loyalty to his brother. They have a blistering attraction that makes hanging Beth out as bait for his brother inspire some serious jealousy in Theo. As for Beth, she can't reconcile why she would be so attracted to Theo when she's been in love with Andreas.

I really liked Beth. I admired her devotion to her ailing grandmother. Her conservative dress and morals made sense, considering she was raised by an elderly woman who instilled her own values into her young granddaughter. Theo seemed kind of arrogant at first, but he wasn't dismissive and cruel about Beth as much as I was expecting. He was more matter-of-fact, saying that she wasn't going to get Andreas' attention without 'gilding the lily,' since Andreas went for the cheap and available-type girls. Theo really won me over when he ministered to Beth after her loss that she suffered. That gave me a few 'sigh' moments. I loved the first time they made love. It was hot but also tender, and it was just what Beth needed at the time.

This one is hard to rate because the writing seemed a bit disjointed at times. On the other hand, I stayed up really late trying to read it, even though my eyes were practically rolling back in my head, I was so tired. That's a good sign. Moreover, the things that make books by this author appealing were apparent. I thought the ending was very sweet, and Theo turns out to have a very romantic soul. It was more than clear how much Beth had come to mean to him, and I love a hero who can make the gestures that speak louder than words, although he delivered the words beautifully as well. Theo and Beth are such a good couple, and I had a smile on my face when I finished this book. It had the elements that make a good modern romance for this reader. How can I not give this book at least 4.25 stars considering that it left me more than satisfied?

View all my reviews
Posted by Danielle at 5:54 AM