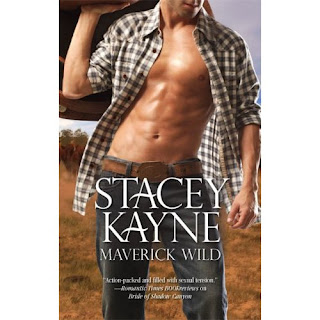 Maverick Wild gave me many hours of entertainment this weekend. It is the second story in the Morgan brothers duo by Stacey Kayne.

Chance Morgan is eager to continue his carefree bachelor existence and not at all eager to get married. However, meeting Cora Mae Tindale again puts a wrench in those plans. Cora is the daughter of his hated stepmother. When they were kids, she was a boon companion who Chance and his brother enjoyed corrupting. Many times they got the young girl in trouble with her mean, overbearing mother, but she never complained about the abuse that she suffered at her mother's hands.

When Chance and Tucker ran away to join the Confederate Army, they knew that they couldn't take little Cora Mae with them. But Chance promised to return for her. However, when they were able to come back, Cora was gone, and their stepmonster had sold their father's farm. Bitter about women and how marrying them destroyed a man's life, Chance vowed never to get married.

Twenty-one years later, they are reunited when Cora Mae arrives in Wyoming to visit her stepbrothers for a short time. When she arrives, she finds that Chance has become a hard, dangerous stranger who only sees a hated Tindale when he looks at her. Little does she know that he sees a beautiful red-head with bewitching curves that make it very difficult to be resistant to her.
He needn't worry that she wants to trap him into marriage. After a painful and harrowing experience with a man that her mother tries to force her to marry, Cora Mae has sworn never to marry. She just wants to feel a sense of family and home that she felt when she tagged along with Chance and Tucker as a girl.

Maverick Wild was an excellent book. It helped to cement my appreciation for Stacey Kayne as a western writer. It's not a copycat of her first book, Maverick Wild. The heroine and hero are different people with different motivations. Yet the elements that made her first novel appeal to me are there in spades: emotion, vivid descriptions of western life, good storytelling, and likable, appealing characters.

Cora Mae is not a rough and ready cowgirl like Skylar. She's more of a homemaker who is very happy knitting and crocheting, and baking goodies. She is a sturdy, curvaceous woman, who has been made to feel that she is unattractive. Although she is self-conscious after years of being put down by her mother, she has an inner strength and spunk that makes her a worthy opponent for Chance. She also has a sweetness and a kindness that makes everyone around her love her. Chance sees this in her, but is determined to resist the pull she has on him, at times showing a suspicious attitude towards her that is hurtful to Cora Mae.

Chance is definitely a western hero. He's very attractive in a hard, sexy way. He's tough and independent, but clearly loves his family and wants to protect them. Although he fights his attraction for Cora Mae fiercely, when he realizes how dangerous her plight is, he steps up to the plate to take measures to keep her safe, even if it means losing his freedom. Of course, deep down, the real reason is that he wants her to stay.

The chemistry between the characters is just as heady and appealing as it was in Mustang Wild, but there is also a poignancy as Cora Mae heals from her fears of men and opens her heart and mind to being loved by Chance.

If you would like to read a western that reinforces the joy of hearth and home, and features characters who are struggling to get over painful pasts to find a happy future, you will love this book.
Posted by Danielle at 5:51 PM