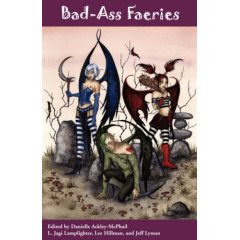 In short, if you love Faeries, you have to check out this volume. It is well worth any money or time spent on it.
Posted by Danielle at 10:41 AM

Not sure why it took me so long to find your post, as I regularly keep an eye out for these things, but thank you so much for your wonderful accounting of Bad-Ass Faeries. I am so very glad you enjoyed it and I am definitely glad you sought out other works by the contributors.

Your appreciation of the book means very much to us.

I just wanted to give you a head's up, if you haven't already found it, but there is a sequel to BAF - Bad-Ass Faeries 2: Just Plain Bad. Many of the same contributors are back, as well as some wonderful stories from new but familiar faces. The premise for this one is that all the bad guys have to be faeries. I must say the contributors had a LOT of fun with this one :)