Samurai Game by Christine Feehan
My rating: 5 of 5 stars

I think that Azami is one of Feehan's more complex GhostWalker heroines. She is definitely the most tortured. Like physically and emotionally. Whitney used her for experiments and operated on her repeatedly and then literally threw her away. She rose like a phoenix from the ashes, which is why her tattoo is so appropriate. I love how badass she is. Not only badass, but also very calm and soothing and has a sense of peace that took many years of discipline to cultivate. I think she's perfect for Sam.

Sam is such a sweetie. I love him. He's definitely lethal and capable of kicking butt big time, but he's also like a big cuddly teddy bear. He's so loyal. I was so glad to see he got a good heroine.

I loved how Sam and Azami connected deeply, and one couldn't even say it was because Whitney paired them. They share a history of having grown up in trouble surroundings and being adopted, and a craving for a real sense of family and home. It makes me so happy that they are together.

I like how much of the action in this book is Azami on her mission to cut off Whitney's espionage supply pipeline. She is ruthless about taking out her enemies, but I'm not mad at her.

One thing that bothered me this time as much as the last, Feehan barely mentions that Sam is African American. I would have liked more references to his skin color just as it was important to get a clear image of him in my head. I made up my own image. However, someone who picked up this book first probably wouldn't even know Sam was black.

As always, I love seeing Team One work together and joke around. I like how Feehan takes the time to introduce some characters she hadn't featured before, like Jonas and Kyle. I liked how much Ryland, Gator, Tucker, Nico, and Ian were in this, not to mention the ladies such as Saber, Lily, and Flame.

I never get enough of these book. This completes the reread of the books I have already read at least twice. Now I'm moving onto Viper Game, for my first reread.

2nd Reread Completed in April 2015. I wanted to revisit the GhostWalkers before I read Viper Game. And let's face it, I start getting withdrawal pains when I spend too long away from the GhostWalkers. I'm obsessed.

My thoughts this time around:

I just plain love this book. I mean, it's nothing special amongst the other books, but I really felt the love between Azami and Sam. I think even though they only knew each other for a short period, and they couldn't have been paired on both sides, it was just a synergy between them that made my true romantic heart feel warm and fuzzy. They make such a good pair, and Sam happened to put into words, they just fit together. Their relationship was deeply romantic and appealingly sensual. Those of us who have followed Team One's GWs, I don't think they could be dissatisfied at seeing Sam get his woman.

I love them just as much as individuals. Sam is so fantastic. He's such a good guy. Smart as a whip, lethal as a ninja and sweet as a puppy. That is my kind of combination. This is one of those heroes that I often wish "Why can't I have a guy like that?" It doesn't happen much. I usually view romance as escapism, and it's not wish fulfillment for me, if I'm honest. More than anything, I'm more in love with love. But, yeah, Sam is 100% on my personal compatibility scale. I think out of all the GhostWalkers, he's probably the one I feel like I would be a good match with in real life. But enough of that!

Azami, I have a serious girl crush on her. She's freaking lethal, but elegant and demure. She's highly intelligent, but has no desire to showboat about it. And she's a serious survivor. Out of all the crap that Whitney did in his experimentation with the GhostWalkers, he committed the most atrocities to her. But it didn't break her, she was reborn as a samurai. There is something about a woman warrior that I just love. While I don't have a tendency towards being a warrior in real life, I truly love that aspect of a woman. Yes, I admit I have a secret desire to be a ninja that never went away. Azami's secret assaults on Whitneys organization were long in coming. He things she's thrown away and probably dead, but she's the real ghost who is going to give him his reckoning.

I do believe this book is slightly more action-focused than the previous book. While Feehan goes in detail with some of the operational information, I liked that. I'm sort of geeky about special ops stuff.


I could probably rave more, but I don't want to repeat myself over what I said on my last read. I can say that it definitely stands up to a reread. Sadly, it makes me want to start the series all over again, but I lack the time for it. :)

Original Review:
I was so sad to finish this book. I love visiting with the GhostWalkers in any capacity, and the arrival of the long lost Thorn (now called Azami) was desperately appreciated. Sam is a sweetheart while clearly maintaining his capable and lethal identity as an enhanced soldier. He is a very calm, together person. I think in some ways, the quiet heart of Team One. From the other books he seemed courtly and down to earth, eminently huggable. It's nice to see more dimensions to him and to see his love story unfold.


Hanging out with Team One again was awesome. And getting to meet the incredibly gifted and advanced Daniel was a real pleasure. He's going to make life very interesting for his parents and the Teams. Also, it was nice seeing Ryland in the field again. I missed seeing him kick some butt. The Team is not just a well-oiled military team, but a close-knit brotherhood/family.

While there is definitely an insta-love vibe between Sam and Thorn, it works for them. I could and do believe in their love. Sam and Azami connect on an intellectual, physical and emotional level. Sam has always kept a part of himself separate from others (despite his tight bonds with the other members of Team One and their wives), and when Azami comes along, she finds her way into the deeper parts of him very quickly. He wants to be her protector, although this lethal woman is more than capable of taking care of herself and others. Sam sees the wounds that Whitney's experiments have left on Azami's psyche and body and it only makes her more beautiful to him, not the broken, unwanted person she fights to leave behind. I loved that Azami is a samurai warrior in every way. I also loved her demure, together, composed demeanor. Despite her calm, she is a very passionate, deep person. She has a lot of strength to survive what she endured from Whitney's heinous experiments, rising like a phoenix from the ashes. The tattoos she wears are very representative of her journey and her psyche. I have to admit, I wish I had gotten to see her go to town with a katana (I'm a martial arts freak, so forgive!), but she proves her lethal skill in many ways, as much as ninja assassin as a samurai (and for a girl who has always thought ninjas were freaking awesome, that worked for me). I liked what I saw of her brothers, and honestly would like to see more.

I am very curious to see where the conspiracy will go next with Whitney and Violet. It looks like there's going to be a game-changer on this front. Azami is going to be a real asset in this arena, with her intel into Whitney, and her resources as a Yoshiie. She probably hates Whitney more than all of the other GhostWalkers combined, and with good reason. Whitney made a huge mistake underestimating her and the other GhostWalker women, not to mention the strong bond between the GhostWalkers. His reckoning is coming, although I don't want to see this series end any time soon.

This book felt too short. I was enjoying it so much, when it ended, I was like, "Oh, no!" I would have been happy with seventy-five more pages, easy. It's like leaving a gathering of your favorite people when these books end, knowing you might not get to spend time together again for a while. I really don't want to wait a year for another installment. It's going to be a long wait. I think I will end up rereading this book to experience more of Sam/Azami's love story and the GhostWalkers yummy goodness.

It's hard to say how I felt about this book, other than loving it and smiling most of the time as I read. The action was hardcore and fierce, and the loving was intense and beautiful, deeply emotional. Despite that satisfaction I felt reading it, I fight a pervasive feeling of sadness because it's over and I don't want to leave this world. I guess I need therapy for my GhostWalkers addiction! That's all I can say right now! Another thumbs up from this die-hard GhostWalkers fan.

*This might be a first draft for this review as my feelings coalesce into something coherent.* 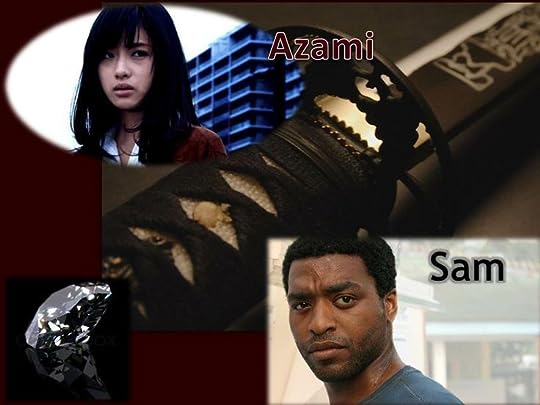