Hostage to Pleasure by Nalini Singh 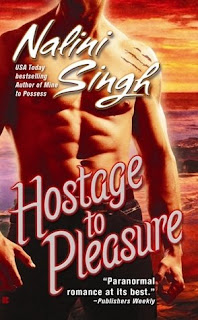 This book was fantastic. I thought that this series would get less interesting as it continued, but it seems to get even more intriguing. I loved the hero Dorian. He is full of contrasts: ice cold, but hot, violent but controlled, and deeply sensual. He is unable to change into a leopard, which he has mostly made peace with. Instead he has honed his skills as such a formidable warrior, that being unable to shapeshift is not a liability. However, being unable to shifts makes him no less in touch with his animal nature. As a lover of shapeshifter romance, I love how Singh depicts the feelings and thoughts of the leopard that dwells inside the man. Dorian is a totally hot hero, although he is an ice cold sniper for the Snow Dancer Leopard pack. He sets his sights on Ashaya Aleine, a member of the hated Psy race, but his leopard recognizes his mate. I love fated to mated books, so it totally worked for me that Dorian decides early on that he has to have Ashaya. And once he recognizes her as his, he will move heaven and earth to protect her and his child.

Ashaya is a Psy who never accepted Silence, the nonemotional protocol of the Psy race. Instead she has continued a charade. She is a scientist with a woman's heart who saves children being subject to horrible scientific experiments. When she delivers them to the Snow Dancer pack for protection, she asks that they extract her son who is being kept hostage to keep her working on a high priority project for the Psy Council. This is how she encounters Dorian. Dorian hates the Psy since his beloved sister was savagely killed by an insane Psy Councilmember. His heart is full of vengeance against the Psy for what was done to his sister. Dorian almost shoots her, but his leopard recognizes his mate, although at first he is unable to accept this. Although in theory she is his enemy, the conflict doesn't get drawn out too long because the mating bond is much stronger between Dorian and Ashaya.

The attraction between Dorian and Ashaya is red hot and drives this book. You want to keep reading to see the fire between them. I loved the banter and interactions between Dorian and Ashaya. However, the plot is very readable as well. Ashaya has a twin who is a best a sociopath, at worst extremely dangerous. I felt for Ashaya's burden of trying to keep her twin under control, and how this has affected her life in many ways. Ashaya is rational and scientific, but is equally loving and loyal to those who matter to her.

Hostage to Pleasure was definitely a joy to read. I had trouble putting the book down, and was impatient to finish it. Nalini Singh has definitely earned my loyalty as an author by writing this fantastic series that mixes science and fiction that is an delicious package. Science fiction can be dry at times to me, but not the way that Singh writes it. She understands that the love story and the sexual chemistry, along with strong depiction of interpersonal relationships, has to be the glue in a paranormal book with science fiction elements, and succeeds without question. I also love how racially and ethnically diverse her characters are. Ashaya seems to be of European and African ancestry, while Dorian has predominantly Nordic features. As long as she continues to write these books with sexy, alpha heroes, and the women they love, I'll continue to eagerly read them.
Posted by Danielle at 3:48 PM